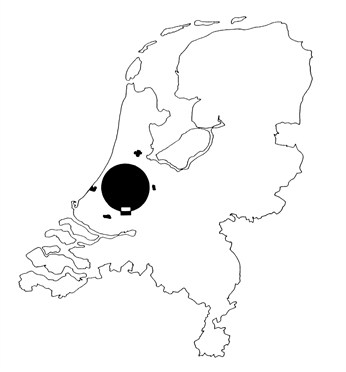 An investigation into the re-planning of the Netherlands

It is a painful irony that the (one) country that more than any other fabricated itself, now treats its territory as if it has the authenticity and inevitability of nature.

Since the last large operation of infrastructural imagination – the «Delta werken” – seemed to complete a cycle of protection against the once threatening elements, it is as if the absence of this threat has also dulled the awareness of the territory, essentially man-made, and therefore the subject of continuing territorial speculation. The ancient but seemingly still valid theme of the «green heart” in which the «core” of the Randstad area would remain empty, encircled by a ring of cities, has in recent memory never been subject to critical scrutiny – What is the point of an empty heart?

Ancient themes such as the green heart, never adjusted, never analysed, have become the more and more unconscious formulas that guide the planification and development of the country.

Through this lack of conceptual explicitness, political decisions are not placed in the context of a particular vision or ambition but are seemingly degenerating in an endless series of pragmatic adjustments that cumulatively have eroded whatever contents or clarity there was in the formula «empty heart, full periphery.”

Especially the policies of deregulation, unleashed in the 80’s as a corrective against an overdose of state interventions, have made a mockery of a formula, which in its «unnaturalness” obviously implies a political regime of clear choices and the uninhibited exercise of controls to implement these choices.

The eighties have turned Holland into a landscape of caricature: «to each village its own periphery.” It is as if the most densely populated nation on earth has held a bargain basement sale of its territory, once carefully husbanded and protected.

As a result, two kinds of semi-fullness or quasi emptiness are facing each other, without clear demarcation. The zone around the void of the green heart as now been filled with the least dense, lowest quality architecture (or rather construction) anywhere in the world. The contrast between full and empty from which the formula derived its legitimacy, has been systematically eroded.

This caricature makes all official discussions surreal: the official hostility against the car, for instance, probably an unconscious remnant of our collective Calvinist tradition – the car is after all the great emancipator/liberator – remains the theme of political discourse, while at the same time 90% of new building clearly implies the smooth and individualized accessibility of a transplanted LA.

Discussions on the possible trajectories of the TGV are hypocritical in the sense that, whatever route is taken, the damage the train will do to the supposedly intact villages on its way to the main centres, exceeds tenfold the damage these villages have done and are doing daily to themselves.

It is crucial that the tradition of inventing ourselves, which may be our most fertile, progressive tradition, is reinvented.

For this investigation of different manipulations of density we propose two radically different models for the entire Netherlands – models that have as their cardinal virtue the fact that they abandon the systematic denial of reality which gives the entire official thinking such a problematic and ineffective aura, and that they reintroduce explicit ideological choices.

In the first, the present compromised vision of the green heart is turned into the systematic creation of a centre in the middle of the country: we call it Puntstad, or the full heart.

Such a centre could have all the advantages of concentration; optimum, efficient infrastructural networks, dense, truly urban conditions (finally), highly developed planning, concentrated power of decision instead of an opaque system of decentralization which looks more and more as cell division gone out of control. Instead of a position of permanent hand wringing we can convert to a systematic, deliberate, intentional fabrication of a western metropolis, while at the same time creating emptiness – a reservoir of void – in the entire rest of the country.

Puntstad will turn the arc of existing cities – Rotterdam, The Hague, Amsterdam, Utrecht – into the periphery, which will greatly reduce the pressure of contemporary performance for which these cities were never intended at the time of their realization. They can finally assume their historical status, encircling the capital like a chain of touristic jewels.

In the other model – Zuidstad (Soucity) – all new construction is concentrated in the southern half of the country, so that the entire urban Holland will be physically closer to the most active zone of Europe – the so-called banana that runs from London to Milan/Turin, essentially following the Rhine valley.

In the Puntstad version, Alexanderpolder is seen as the prototypical edge condition between solid and void, the city to the north and the new landscape to the south.

In the Zuidstad version, Alexanderpolder represents the northern edge of the new city, facing what is no longer the compromised green heart, but in effect the vacated upper part of the country, devoted to nature, leisure, history, and tourism, all these conditions incompatible with true metropolitan experience of the city.

For each model different extremes of density are investigated from a Los Angeles-like low density to a New York-like hyper density.

Alexanderpolder is a «zoom” which allows us to reimagine a totally unrecognisable new Dutch reality.