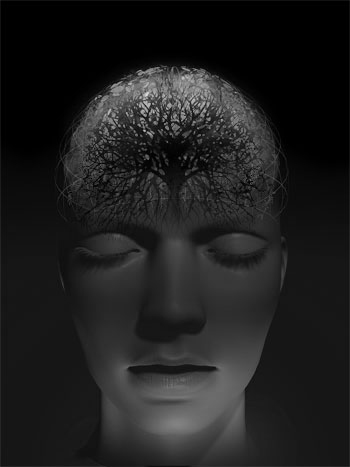 John Hawks is in the middle of explaining his research on human evolution when he drops a bombshell. Running down a list of changes that have occurred in our skeleton and skull since the Stone Age, the University of Wisconsin anthropologist nonchalantly adds, “And it’s also clear the brain has been shrinking.”

“Shrinking?” I ask. “I thought it was getting larger.” The whole ascent-of-man thing.

“That was true for 2 million years of our evolution,” Hawks says. “But there has been a reversal.”

He rattles off some dismaying numbers: Over the past 20,000 years, the average volume of the human male brain has decreased from 1,500 cubic centimeters to 1,350 cc, losing a chunk the size of a tennis ball. The female brain has shrunk by about the same proportion. “I’d call that major downsizing in an evolutionary eyeblink,” he says. “This happened in China, Europe, Africa—everywhere we look.” If our brain keeps dwindling at that rate over the next 20,000 years, it will start to approach the size of that found in Homo erectus, a relative that lived half a million years ago and had a brain volume of only 1,100 cc. Possibly owing to said shrinkage, it takes me a while to catch on. “Are you saying we’re getting dumber?” I ask.

Hawks, a bearish man with rounded features and a jovial disposition, looks at me with an amused expression. “It certainly gives you a different perspective on the advantage of a big brain,” he says.

After meeting with Hawks, I call around to other experts to see if they know about our shrinking brain. Geneticists who study the evolution of the human genome seem as surprised as I am (typical response: “No kidding!”), which makes me wonder if I’m the world’s most gullible person. But no, Hawks is not pulling my leg. As I soon discover, only a tight-knit circle of paleontologists seem to be in on the secret, and even they seem a bit muddled about the matter. Their theories as to why the human brain is shrinking are all over the map.

Some believe the erosion of our gray matter means that modern humans are indeed getting dumber. (Late-night talk show hosts, take note—there’s got to be some good comic material to mine here.) Other authorities argue just the opposite: As the brain shrank, its wiring became more efficient, transforming us into quicker, more agile thinkers. Still others believe that the reduction in brain size is proof that we have tamed ourselves, just as we domesticated sheep, pigs, and cattle, all of which are smaller-brained than their wild ancestors. The more I learn, the more baffled I become that news of our shrinking brain has been so underplayed, not just in the media but among scientists. “It’s strange, I agree,” says Christopher Stringer, a paleoanthropologist and expert on human origins at the Natural History Museum in London. “Scientists haven’t given the matter the attention it deserves. Many ignore it or consider it an insignificant detail.”

But the routine dismissal is not as weird as it seems at first blush, Stringer suggests, due to the issue of scaling. “As a general rule,” he says, “the more meat on your bones, the more brain you need to control massive muscle blocks.” An elephant brain, for instance, can weigh four times as much as a human’s. Scaling is also why nobody seems too surprised by the large brains of the Neanderthals, the burly hominids that died out about 30,000 years ago.

The Homo sapiens with the biggest brains lived 20,000 to 30,000 years ago in Europe. Called the Cro-Magnons, they had barrel chests and huge, jutting jaws with enormous teeth. Consequently, their large brains have often been attributed to brawniness rather than brilliance. In support of that claim, one widely cited study found that the ratio of brain volume to body mass—commonly referred to as the encephalization quotient, or EQ—was the same for Cro-Magnons as it is for us. On that basis, Stringer says, our ancestors were presumed to have the same raw cognitive horsepower.

Now many anthropologists are rethinking the equation. For one thing, it is no longer clear that EQs flatlined back in the Stone Age. Recent studies of human fossils suggest the brain shrank more quickly than the body in near-modern times. More important, analysis of the genome casts doubt on the notion that modern humans are simply daintier but otherwise identical versions of our ancestors, right down to how we think and feel. Over the very period that the brain shrank, our DNA accumulated numerous adaptive mutations related to brain development and neurotransmitter systems—an indication that even as the organ got smaller, its inner workings changed. The impact of these mutations remains uncertain, but many scientists say it is plausible that our temperament or reasoning abilities shifted as a result.

Numerous phone calls later, it dawns on me that the world’s foremost experts do not really know why our organ of intellect has been vanishing. But after long ignoring the issue, some of them have at least decided the matter is of sufficient importance to warrant a formal inquiry. They have even drawn some bold, albeit preliminary, conclusions.