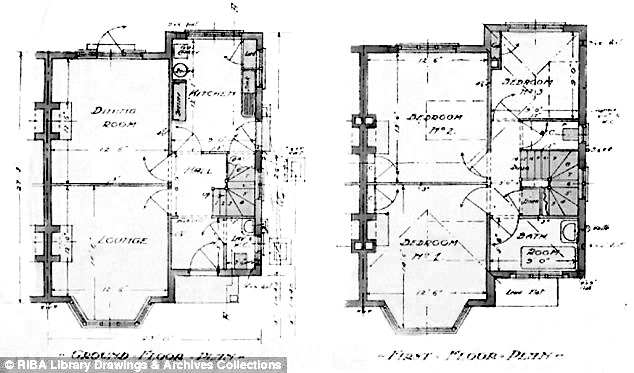 The incredible shrinking houses: The average new British home is now just 925 square feet – barely HALF the size they were in the 1920s

Millions of Britons are living in ‘rabbit hutch’ family homes that have halved in size since the 1920s, it was revealed today.

The average semi-detached house now has one less bedroom and is much more ‘cramped, dark and artificially lit’ than those built in the early 20th century.

In 1920, average homes usually measured 1,647 square feet and boasted four bedrooms, but today’s equivalent has three bedrooms and is 925 square feet, according to the Institution of British Architects. More than 90 years ago the millions of three bedroom homes built for Britain’s burgeoning middle classes were also markedly larger than those today.

RIBA’s research has found that the average one bedroom flat is now the same size as a London Underground tube carriage. And average terraced homes have also shrunk – from three bedrooms with 1,020 square feet, to two bedrooms and 645 square feet.

Experts have warned the lack of space and light in modern homes could cause marital problems and even stop children from reaching their full potential at school.

Developers could be forced to build homes to new minimum space standards as the government called for an end to the spread of ‘rabbit hutch homes’.

Under a proposed radical shake up of building rules, developers could be made to construct homes to a specific size or above.

Ministers are concerned that new homes are being built to half the size they were 80 years ago across Britain. Surveys from the Royal Institute of British Architects show that 60 per cent of people who would never consider a new home are turned off by the size of the rooms. Some 80 per cent said they would be more likely to choose a home that met minimum space standards. Communities minister Don Foster yesterday launched a consultation to simplify housing standards. He promised to slash red tape for house builders, scrapping up to 90 per cent of existing restrictions

But the consultation also warns that the government could bring in new minimum standards on space to meet the growing demand from families for larger homes.

Local authorities could also ask developers to make homes more friendly for the elderly or wheelchair-bound with new ‘access’ requirements.

Eric Pickles, the Communities Secretary, has attacked the way families are ‘trapped in rabbit hutch homes’.

He blamed the move towards smaller homes on Labour policy, which decreed that at least 30 homes had to be built on every hectare of land.

Ministers see the tighter restrictions as pay back for helping the homebuilding sector to recover.

Government policies such as the controversial help to buy mortgage scheme are expected to fuel the building sector and they now want developers to give something back to communities.

In return, ministers will reduce more than 1,500 pages of guidance to fewer than 80, a move they claim will save builders time and money.

Mr Foster said: ‘At a time when we are working closely with British business to create jobs and build a stronger economy it’s essential the government plays its part by taking off the bureaucratic handbrake that holds back house building and adds unnecessary cost. I’m proposing to cut needless red tape to let house builders get on with the real job of building the high quality new homes that people need, especially families and first time buyers.’

He added: ‘The current mish-mash of housing standards means that from Allerdale in Cumbria to Zoar in Cornwall no same set of rules always applies – it’s confusing, bureaucratic and cannot be allowed to continue.’

Some of the standards facing abolition include requiring rainwater harvesting in places where there is no water shortage, demanding solar panels or windmills on homes where they cannot physically fit, requirements to build accessible flats on floors that cannot be reached by disabled people, and demanding bigger windows to allow for dirt on them rather than assuming homeowners will simply clean them to allow in more light.’