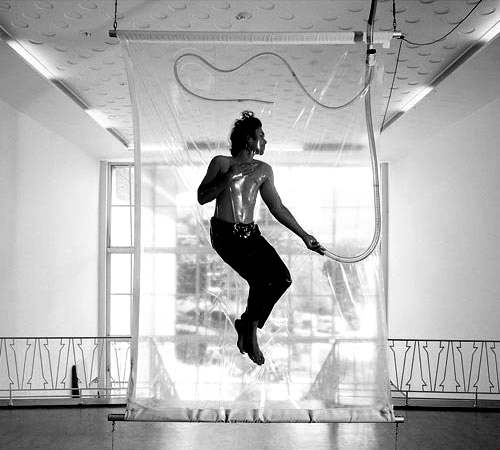 This text was posted based on a panel discussion Aaron Betsky led on Saturday, October 30, at the Venice Architecture Biennale, with Hani Rashid, Winy Maas, and Wolf Prix. Below is the text I gave those three gentlemen in preparation for the event.

» Last night, wrapping up the leftovers of the usual too-large dinner in that great invention of the late 20th century, Saran Wrap, it occurred to me: We are shrink-wrapping everything. Maybe it is a sign of the times. We no longer want to be as exuberant and wasteful as we once were, and so we save, wrap, and contain everything of which we have too much. Shrink-wrapping is post-recession chic. You can see it on the runways, with the return of simple dresses, thin suits and ties, and you can see it in architecture, whose latest star is the Japanese Pritzker Architecture Prize–winning architect Kazuyo Sejima, who contrasts the exuberance of a previous generation with boxes (like the New Museum) that are so minimal you might not even notice them. Instead of computer-generated blobs, she produces such undulating, one-floor-fits-and-contains-all structures as the Rolex Center at the University of Lausanne.

As we and everything we own gets bigger, our packages are getting smaller, tighter, and shinier. We surround ourselves with smooth packages that try to contain everything in ever-slimmer and -smoother packages.  Think of the iPad, the iPhone, or the Android phone: a huge amount of technology packed into thin slabs that don’t even have any visible controls. What remains is slick, rounded, with nothing added—a true modernist object. You slide you fingers across, but you never get into the form, and the images just shimmer beyond reach.

These packages give us the illusion that we have everything under control while all that information and all that power just sprawls from the icon on the surface to unknown and unseen servers somewhere. We have no access to or control over how things work, but we get ever slicker images and objects that give us the illusion that everything is available. The more we shrink-wrap, the less we know about what is inside. Do you really know how an iPhone works?  It is the look that is everything: smooth, curved, it gives the appearance of transparency, and yet hides everything.

I think that shrink-wrapping is a new kind of design discipline that has appeared to control the «too much» of our lives: the too much information, too many choices, and just too much stuff. It tries to hide the too much food, too much websites. You can see it at a large scale as well: shrink-wrapping is our answer to sprawl. Our cities are sprawling—over half of all Americans now live in suburbia. As our cities get larger, we try to throw greenbelts around them, as Portland, Ore. has done. In that sprawl, our office buildings with their shiny facades try to give the illusion of business coherence while hiding the Dilbert-land inside. Office space is getting smaller and slicker there, too: The cubicle is giving way to hot desks and “team tables” with white boards and flat-screen monitors.

As we move through sprawl, our cars wrap our mobile lives into shiny containers. They not only take us places, they contain our music, information and connections: Most new cars now have voluminous hard drives to store all your information hiding under those dashboards controlled by voice or touchscreen. When we get home, our house are hermetically sealed from outside influences with double insulation and security systems that keep in the air-conditioning and our possessions. Our flat screens give us access to and control over everything, but only in a slick image hovering on that plane. Shrink-wrapping is part even of the smallest things: Think of how many tubes and cans no longer have separate lids or attachments.

All of this is symptomatic of larger developments. Because of that too much, our bodies sprawl, and we try to contain them with tight undergarments. Technology sprawls into connections everywhere, and corporations and families sprawl: they fall apart into continually recombining bits and pieces. We live in a floating world where movement and change is everything. Photoshop shrinks reality to fit and smoothes out all the wrinkles. Facebook is our social shrink-wrap. We live not in a Golden or even a Gilded Age, but in the Shrink-Wrapped Age.»

Aaron Betsky is the director of the Cincinnati Art Museum, and in 2008 he was director of the 11th Venice International Architecture Biennale. Trained as an architect at Yale, he has published more than a dozen books on art, architecture, and design and teaches and lectures about design around the world. Aaron worked for Frank O. Gehry and Associates and Hodgetts & Fung Design Associates as a designer, taught for many years at the Southern California Institute of Architecture, and between 1995 and 2001 was curator of architecture and design at the San Francisco Museum of Modern Art. From 2001 to 2006 he was director of the Netherlands Architecture Institute in Rotterdam, the Netherlands.